a reduced label of sound

emitter micro 2015 is a 3-day festival of sound and more in berlin. curated by kris limbach and pierce warnecke and this year especially co-curated by NK and Ausland, emitter micro proposes a selection of international and berlin based artists from multiple contemporary sound practices and genres.

presented by digital in berlin

Night I – 7 th of May at Taborkirche Kreuzberg 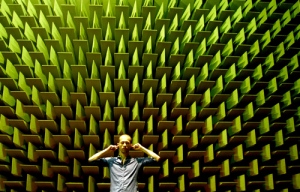 Jacob Kirkegaard is an artist and composer who works in carefully selected environments to generaterecordings that are used in compositions, or combined with video imagery in visual, spatial installations. His works reveal unheard sonic phenomena and present listening as a means of experiencing the world. Based in Berlin Kirkegaard has presented his works at galleries, museums and concert spaces throughout the world, including MoMA in New York, LOUISIANA in Denmark, KW in Berlin, The Menil Collection & at the Rothko Chapel in Houston, Aichi Triennale in Nagoya, Japan and most recently with a solo exhibition at the Mori Art Museum in Tokyo, Japan. His sound works are released on the TOUCH Important Records, VON Archives & Posh Isolation labels
http://fonik.dk/ 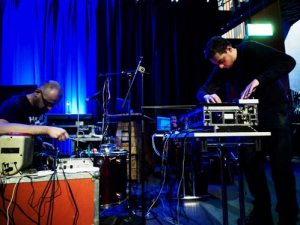 Aspec(t) are SEC_ and Mario Gabola from Naples, Italy. SEC_ plays Revox tape recorder, computer and no-
input feedback manipulated on tape. Mario plays saxophone
and feedbacks through an electro-acoustic chain of resonant drums, microphones and little speakers. Their music shares the timbrical research and the execution
control typical of some radical impro music,
but reinterpreted and contaminated with the feedback
electronics and the research on analog devices and concrete sound materials, as well as with the a
certain kind of obscureclub culture. The result is a fascinating and inextricable forest of sounds: frenetic structures, noise explosions, ancestral cries, an unceasing
perversion of the soundscape and the time stream. Feedback, self-regulating systems, mimicry, mutations,
becoming-animal, asymmetrical dislocation are some
of the keywords. 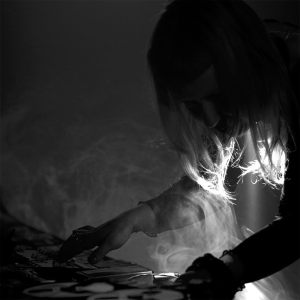 MARTA ZAPPAROLI is an Italian experimental sound artist, improviser, performer, and musician. She works and lives in Berlin from 2007. Her music mainly consists in narrative sonic pieces that she builds using a wide variety of recording techniques, devices and self-made microphones with out borders and many unconventional techniques. She is interested on the boundaries and relations between real sound world ,vibration
sound, noise pollution, natural radio, wireless and communication and inaudible sound . In the past two years , her new ongoing research and project it is an investigation focused on Inaudible Sound and the multiple effects of its spectral side which shape our sense andperception of the reality. With all the recordings, She building strongly narrative, imaginative sonic pieces live through improvisation with real-time tape manipulation. She performed in Festivals all over Europa, Turkey, Norway, Sweden and U.S.A . Playing with many highly regarded musicians and bands.
Form 2010 she is a member of Berlin’s 24-piece Splitter Orchestra. She released several albums on Umbrella Noise records, Idiosyncratics, Audition Records, Nohmad Records and Zeromoon. She was also extensively featured on WDR3 Open Studio Elektronische Musik Deutchland. In 2006 she received the MOVIN-UP Award for her field recording project An Audio Portrait of Berlin.

NIGHT II: 8th of may at ausland:

Frank Bretschneider
Frank Bretschneider is a musician, composer and video artist in Berlin. His work is known for precise sound placement, complex, interwoven rhythm structures and its minimal, flowing approach. Bretschneider’s subtle and detailed music is echoed by his visuals: perfect translated realizations of the qualities found in music within visual phenomena. Bretschneider (1956) was raised in Karl-Marx-Stadt (Chemnitz since 1990), where his aesthetic developed as he listened to pirate radio and smuggled Beastie Boys tapes in the former East Germany. In 1986, after establishing his cassette label klangFarBe, Bretschneider founded AG Geige, a successful and influential East German underground band. In 1995, Bretschneider and fellow AG Geige member Olaf Bender founded the Rastermusic record Most of Bretschneider’s early solo albums – about half a dozen – were under the alias Komet, the first, SAAT, appearing in 1996. Since then Bretschneider has released his work (in addition to raster noton) on various labels including 12k, Line, Mille Plateaux or Shitkatapult, and contributed to some well-known compilations like CLICKS & CUTS on
Mille Plateaux and raster-noton’s 20′ TO 2000 series. 2010 saw the release of EXP, a rather complex and abstract audio- visual work and his 2012 album KIPPSCHWINGUNGEN explores the sound of the Subharchord, a unique electronic instrument based on subharmonic sound generation. SUPER.TRIGGER, his 2013 album for raster-noton, is an absolute trove of percussive tension. And his newest, SINN + FORM, is all about improvisation and analog modular synth chaos. 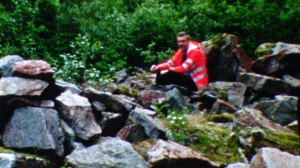 His film work The Findings (Dale) (super 8 film transferred to HD video, 16 min)with music by Kenneth Kirschner follows our narrator on a walk into the woods to revisit an incredible place that he can no longer find. The more he tries to describe the thing to us, the less clear anything about it is: his descriptions change with each attempt until it is unclear whether what he found ever existed. And yet it creates an object in the mind, and it this new ‘lost thing’ that is suspended between narrator and viewer. The Findings grapples with the mutual transformations of thought and material that constitute the world, often through the creative work of forgetting, obfuscating, falsifying, or simply wandering away. 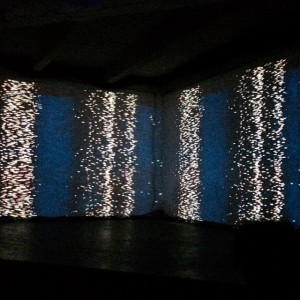 Kasia Justka is a polish multimedia artist based in Berlin. Her work capitalizes on her obsessions with the medium of electricity and weird sounds- Her art can be seen as invocations to the vast power inherent within electronic systems and networks…With this conceptual frame in mind Kasia fashions a dynamic order and form from primitive entropy. Using light,sound and objects as her tools,her Intuitive and analogue based performances
have led to collaborations with musicians, theaters, galleries, clubs, fashion designers, artists and a whole host of other respected luminaries working in different disciplines within the creative spectrum. Among these are: Electrovision London, Noise=Noise,Transvisualia, Free Form Festival, CynetArt_08, Unsound Festival, Piksel in Norway, Warsaw Electronic Festival, gallery Zacheta, WRO, TR Warszawa, Volksbuhne and others. INVISIBLE INAUDIBLE is an audio-visual performance, happening in darkness. Her goal is to build atmosphere which she had duringspending time in a cave full of mother bats. Playing inaudible sounds and invisible images.Get the silent darkness scream. 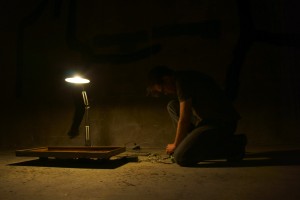 Describing his work through the pithy phrase, “I rust things,” Jim Haynes is an artist who has developed a vocabulary of decay that spans numerous media, focusing on how decay parallels and relates to the perception of time
when cycles of activity collapse into stasis. Drawing from shortwave radio static, electric field disturbances, surveillance camera observations, controlled feedback oscillations, and textured noise, Haynes manifests a broken
minimalism through magnetic drones, imploded noise, and ghostly projections. His additive-subtractive strategies of layering textures seek to accentuate the resonant frequencies of spaces and / or the volatile electromagnetic ephemera that might be culled from the ether. Psychologically charged emotions, teleological abstraction, or even allegorical frameworks are all addressed through his material phenomenology. A resident of the San Francisco Bay Area, Haynes has exhibited and performed internationally at such venues at the Electric Works (San Francisco), the San Francisco Museum of Modern Art , the Bekerley Art Museum, The Exploratorium (San Francisco), WestSpace (Melbourne, Australia), Jack Straw Productions (Seattle), Eyedrum (Atlanta), Diapason (New York), and The Lab (San Francisco). His recorded works are published through Editions Mego, Hooker Vision, Elevator Bath, The Helen Scarsdale Agency, amongst others. He has collaborated with Steven Stapleton (Nurse With Wound), M.S. Waldron (irr. app. (ext.)), Keith
Evans, and Loren Chasse. Haynes’ performance at NK Project is supported in part by the Foundation for Contemporary Arts Emergency Arts Grant.
www.helenscarsdale.com/haynes 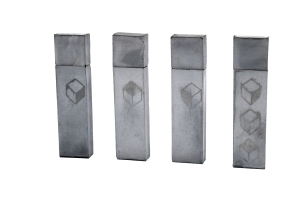 emitter micro is extremely happy to announce our next release “Hanz Memorial” curated by Niko LFO. This concrete USB stick with generative sound application is limited to 3×30 editions. Niko LFO will present his research via a live demonstration. Hanz ■ Memorial is a rework of musical archives from the body of work of forgotten avant-garde and musique concrète composer Hans Nibler in a generative composition that emphasizes Hans Nibler’s research and applications of cybernetics’ circular causality, self-regulatory systems, quantum mechanics and self-referential objects to sound. The abstract sound
material resulting refers equally to electroacoustic avant-garde, contemporary electronic music and computational art. Nicolas Lefort (a.k.a. Niko LFO) works in Berlin as a multi-instrumentalist and producer in various projects (reliq , Shaddah Tuum, Tronc) and co-curates Berlin based artist collective / label Portals Editions. After a personal trajectory through different domains of music, mostly improvisational, Nicolas Lefort arrived to the field of generative composition approaching sound as matter. While constructing puzzling relations between sound, space, objects and architectures, Lefort digs a sonic path downwards to explore matter in its full potentiality.
http://cargocollective.com/nikolfo/
www.emittermicro.com 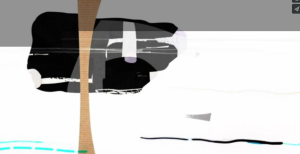 unu (Antonis Anissegos) and bestbefore (Andreas Karaoulanis) met in March 2010 on stage at a Festival in Thessaloniki, following the invitation of the festival director to perform together. The match was instant and after the
success of their performance, they decided to form the duo best before unu. Since then they produced together many short audio/visual pieces, and performed often in Greece and in Germany.The intensive electronics of unu found a visual counterpoint in the moving images of bestbefore, generating complex sonic-visual formations. While audio frequencies are analyzed and passed into image motions, which in turn feed back to the music, a never ending circulation of influence travels in both directions. As an enrichment of the collaboration, best before unu appears also with live piano, adding an acoustic dimension to the creative process. A journey through morphing landscapes and imaginary organisms, stimulating the audience to continuously perceive new associations.
https://vimeo.com/channels/bestbeforeunu
http://enstase.com/
http://bestbefore.gr/blog/ 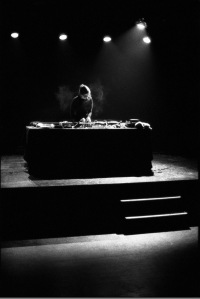 Born in Bolzano (IT),  JD ZAZIE is a DJ, turntablist and sound artist based in Berlin. Coming from a DJ and a radiophonic background JD Zazie  has explored over the years different approaches of real-time manipulation on fixed recorded sound.
In her work she redefines DJ and electroacoustic activities. As a solo performer, in small groups or large ensembles she moves in an area which is constantly stretching the borders of what is supposed to be DJ mixing, free improvisation and composed music. Intended as music instruments CDjs, turntables and mixer are her tools to mix the specific sound-sources she plays (mostly electronic music, electroacoustic music, musique concrète, field recordings and improvised music). The typology of the sound-sources varies from already existing audio publications and sound effects, to self recorded audio files – as live-set and field-recordings -,  to selected pre-mixed material. Juxtaposition, decontextualization, fragmentation, repetition, sonic texture, scratch and error are elements of the grammar adopted to relate, organize and rearrange the sound material following her “Äpfelzerstörer’s method”. In her sound installations she explores everyday life, refers to urbanism and relates to sound atmosphere.